Mongolia is a beautiful country. My partner & I have the opportunity to visit the country from 16th to 21st July 2015.


On 20 June 2015 (Saturday), my partner and I decided to take a day tour and we asked the hotel concierge for some information and recommendation. We came about this company called Nomadic Discovery (http://www.nomadicdiscovery.com/) and signed for the “Terelj National Tour” which cost us USD130 per pax.


The Guide
The guide / owner was Munkhbileg Ulambayar (he asked us to call him ‘Munkh’ for short). He is able to communicate very well in English - later during the trip we found out he actually studied and graduated from London, United Kingdom (UK). He originally worked in the private sector, however ventured into this business which he started in 2013. This young gentleman has a very friendly and pleasant demeanour. He made sure we were comfortable and well taken care off throughout the tour. 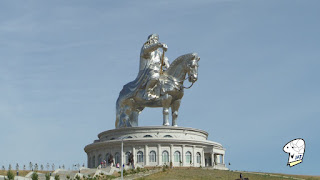 1. Chinggis Khaan (Genghis Khan) statue complex (location here)
A complex structure dedicated to one of their great historical leader. This complex was build in this area as it was said to be the location where Chinggis Khaan found his divine 'Golden Whip'. There is a museum at the basement of the complex. It contains the history of the nation of Mongolia, their ancient tools and weapons used and statutes. No photography nor videography were allowed in the museum's area. 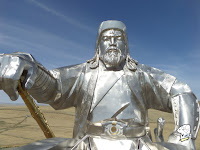 There are staircases and an elevator which allowed tourist to climb to a platform to see the beautiful landscape. The platform is actually the head of the horse. The photo on the right is the head of the statue and on his right hand, you can see the golden whip.

Here is a brief video showing the view from the platform;

At the lobby of the complex, there are two displays; one representing the golden whip and a boot.


After about 40 minutes at the complex, we proceeded to Terelj National Park. The view along the country side was very beautiful as show below; 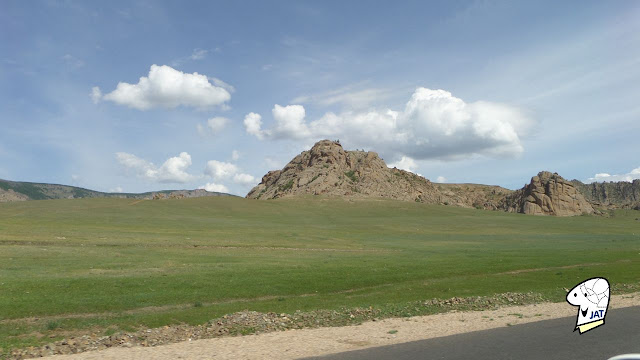 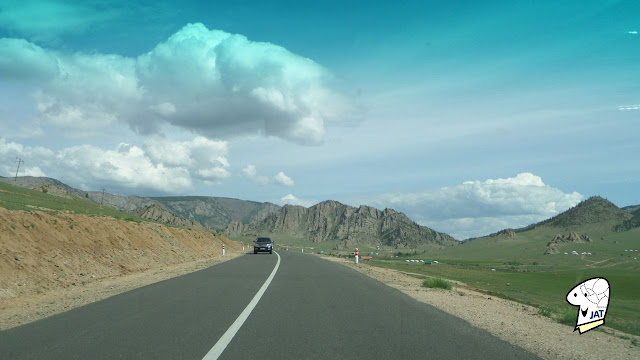 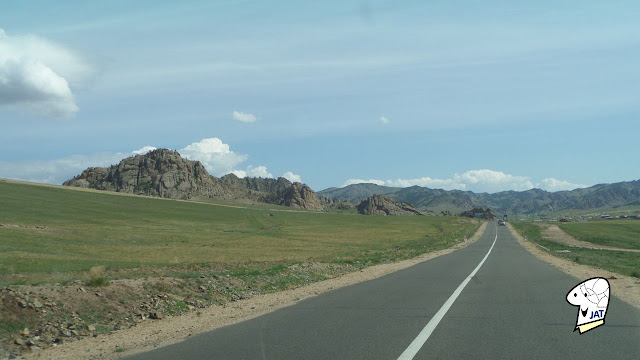 2. Horse Riding (location here)
After driving approximately approximately 50 kilometers, we reached the site of our next activity, horse riding. Munkh, our guide made arrangement with a local horse owner to bring us on a simple expedition, we had the option of going upwards towards the mountains or downwards towards a river. This being our first time riding horses and not feeling too adventurous, we chose the river.

As we were waiting for our local guide and horse owner, a group was returning from their expedition.

We were given some basic instructions on how to direct the horse with the reins; pull the reins to the direction you wish to head (right --> right / left --> left), and pull both side towards our body if slow or stop the horse. The local guide enquired of us about our level of confidence to manage our respective horses, or he will lead and manage the horses for us. We decided to be led, and he held on to a rope that was tied to the reins of the horses we rode.

Below are some photographs during the expedition along the river bank. Click on the photographs below enlarge the image.

3. Lunch (location here)
After about a 40 minutes horse side, it was time for lunch. We had lunch at one of the two hotels nearby, and this called 'UB 2' (Ulaanbaatar 2) hotel. Munkh upon our requested ordered local Mongolian dishes. 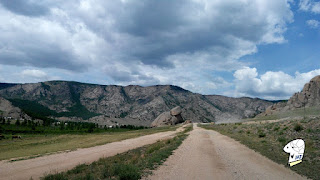 After lunch and resting for a bit, we proceeded to our next sight seeing destination called Turtle Rock. It is a formation of stones that resembles a turtle when viewed at a certain angle. It was just a short drive from the restaurant. Below is a video as we are approaching the Turtle Rock.

(Note: the road / terrain was rather rough hence the video is quite jerky).

After we reached the base of Turtle Rock, we were able to climb a side of it to view the surrounding landscape. Thought it was approximately 2:00PM in the afternoon and the sun was high in the sky, we did not feel that it was hot. There was a cool breeze blowing and we just breath in the fresh air. Once again a magnificent sight to behold.


Here a short video of the surrounding landscape view from Turtle Rock;

5. The Return to Ulaanbaatar
After spending about 20 minutes on Turtle Rock, we decided to make our way back to Ulaanbaatar as we have a performance to catch. Below are some photographs and a video logs of sights & scenes during the trip back to the city. Click on the photographs below enlarge the image.


The journey from Terelj National Park to Ulaanbaatar, Mongolia; https://www.youtube.com/playlist?list=PLuPoFT-qwR3ofa_Pi4F-zDgVHSCTspa23

The Tumen Ekh ensemble was founded in 1989 and has gone on to win awards across the world. The ensemble’s goal is to present a rare selection of ancient Mongolian performing arts and culture to local and international audiences, particularly younger generations.


Here are some videos of their performance.

Just A Thoughts ah
The tour was money and time well spent. My partner and I truly had a enjoyable and memorable time.

If you can spent a day during your time in Ulaanbaatar, Mongolia,  I will recommend you sign up for this Terelj National Tour with Nomadic Discovery.
Posted by JAT