On 20 June 2015, my partner & I caught the performance of the Tumen Ekh National Song and Dance Ensemble at the end of our Terelj National Park tour. This is one of the must-see performance while in Ulaanbaatar, Mongolia.

The Tumen Ekh ensemble was founded in 1989 and has gone on to win awards across the world. The ensemble’s goal is to present a rare selection of ancient Mongolian performing arts and culture to local and international audiences, particularly younger generations. 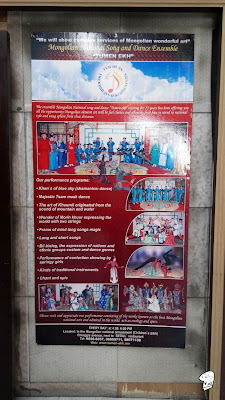 The ensemble comprises artists who perform all types of Mongolian song, music and dance. They play traditional instruments including the morin khuur (horse head fiddle) and perform Mongolian long song, epic and eulogy songs, a ritualistic shaman ritual dance, an ancient palace dance and a Tsam mask dance. Their performances are highly professional but retain the authenticity and traditions of nomadic culture.

The music of Mongolia expresses vastness, freedom and life in harmony with nature and the environment. The Tumen Ekh ensemble is one of the most successful folk art groups to share traditional Mongolian music with the world, having traveled to over 40 countries to introduce the unique, vibrant and astonishing art of Mongolia. They have successfully performed at the World Music Center in New York, the Kennedy Center in Washington D.C. and Buckingham Palace in the UK among others. But Tumen Ekh is more than just a group of performers on a stage. Members of the ensemble participate in cultural exchanges, conduct research and studies on folklore and engage in training and creative activities.

The Tumen Ekh ensemble will take you on a brief tour to Mongolia’s world of folk art, where vast steppes of grassland, clear blue skies, and a nomadic way of life has been developed and preserved for thousands of years. (Source: Facebook)


The performance building (location here) is within the compound of the Mongolia National Amusement Park, near the Seoul Restaurant.


The price of the ticket was very reasonable in my opinion;

There are about 13 distinct songs/acts/performances and the whole show took approximately 70 minutes. They have two shows per-day, one starting at 4:00PM and another at 6:00PM.

The seats are large steps (one higher than the other) and form cushions are placed to denote each seat. The rows of seats are in a semi-cycle formation. There are no numbering on the seats and it is first-come-first served, hence it is suggested that you arrive early and enter the performance hall as it opens so that you can get the first or second row facing the center stage.

There are English narrations between each segment of the performance to explain briefly about the coming acts and performances.


At the lobby of the performance hall, the portraits of the Tumen Ekh performance troop members are hung on the walls.

Just A Thought Ah
My partner and I truly enjoy this performance very much. I believe it was time and money well spent to witness this performing arts live and to keep a cultural piece of history alive.